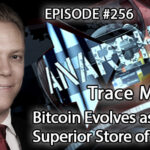 Jeff interviews Trace Mayer at the Latin American Bitcoin Conference in Mexico City, topics include: internet traffic numbers are higher now than they were during the 2013 bubble, it could be one of the great asymmetric plays even now, a billion dollars in venture capital has been put into Bitcoin this year alone, Bitcoin is a new asset class, Bitcoin has programmable extensibility which is a new feature of money, crypto anarchy and cypherspace, Bitcoin security and the Amory wallet, securing private keys, the changing of the economics of violence, the cost of securing massive value has become trivial, Bitcoin as an investment hedge, Bitcoin is a lot harder to confiscate than gold, Bitcoin’s chance of success is higher now than ever.

You can view the video on YouTube at the following URL: https://youtu.be/CwESaqkOCj0

Anarchast Archives
No Copyright Intellectual property is not a valid form of property.