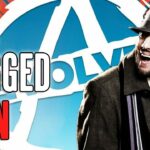 R.A. The Rugged Man on Mumble Rappers, Sellouts and Being a Libertarian Rapper

0 0 0 0
Previous : Unschooling, Peaceful Parenting and Creating Community with Angel Robinson
Next : How Ayahuasca, Peyote and DMT can Change your Life… and How to Do Them All at Anarchapulco 2020

Anarchast Archives
No Copyright Intellectual property is not a valid form of property.