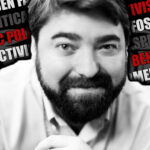 A case study into what happens to people when they play the game of thrones that is politics for the wrong reasons. Today we go through the evidence released by a long time critic of Adam Kokesh appearing to show Ben Farmer, lead campaign strategist for the Kokesh 2020 campaign for not president, contacting an infosec professional for the purposes of attacking their critic Graham Smith.

UPDATE: Elijah Gizzarelli, a guy that has worked with Kokesh and Farmer on Kokesh’s tours / campaign, has stated in a video (where he was attempting to defend Farmer) that Farmer affirmed to him that the text message conversation depicted here is authentic.

0 0 0 0
Previous : Steemits Fatal Flaw – Malicious Silencing
Next : PATRICK STEALS FROM YOU IN THIS VIDEO

Not Governor Patrick Smith
No Copyright Intellectual property is not a valid form of property.